A Showgirl You Should Know: 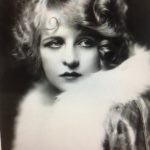 Like the 1920s film actress Barbara La Marr, Eileen Wenzel was deemed just too beautiful, cursed with incredible beauty that was doomed to have an unhappy ending.

Wenzel was a tall ravishing brunette. As a showgirl she worked for the top of the tops, producers Earl Carroll and Flo Ziegfeld, Jr. Though arrested in 1930 along with Faith Bacon and other showgirls, and producer Carroll it was not an uncommon occurrence, nor a detriment to one’s career. Wenzel and the rest of the girls were accused of showing too much skin. The arrest and the following notoriety would lead to standing room only performances, massive amounts of attention and free publicity for the svelte Eileen. Her face and figure soon covered a multitude of advertisements. Millionaires vied for her time including an Egyptian prince.

As fate would have it her future would be determined by a chance encounter.

Showgirls at the time were considered a serious commodity and having one grace a gentleman’s arm was a badge of honor. Girls, many from humble backgrounds, were invited to high society parties and to the most popular restaurants and clubs. The high esteem these girls — and they were always “girls” — were held in cannot be underestimated. They were the trendsetters, the celebrities of their day. To be chosen, amongst thousands of ambitious, mostly blonde-dyed young girls, compares to nothing else today.

One June afternoon Eileen was attending a swanky cocktail party where she met the handsome millionaire playboy Louis Ehret, Jr., scion of a brewery and real estate fortune. His grandfather founded Manhattan’s Hell Gate Brewery. When Grandfather George died, it was said he left a $40,000,000 fortune. Young Ehret didn’t quite have the ambition as his grandfather and would rather spend what money remained chasing after beautiful showgirls. He was known as a gad about whom regularly attended parties and the theatre and even though this was the start of the Great Depression there were still plenty of social events where one with enough loot could have a gay old time.

This afternoon Ehret’s gaze landed on Eileen and he asked her to dinner that night. She agreed as long as he would pick her up at the stage door after her show. Twenty-one year old Eileen along with tap dancing champion Eleanor Powell and Lupe Velez were currently performing in Ziegfeld’s okay production of “Hot-Cha.” The musical had opened on Broadway March of 1932, but sadly Broadway was seeing the end of the showgirl era and Ziegfeld had had to borrow great sums to get the show produced. As it was his usual extravaganza the show could in no way recoup its cost and closed after just 15 weeks.

This balmy June night Eileen and Ehret dined and danced at the hugely popular Central Park Casino. The elegant Casino, located in Central Park near Fifth Avenue and 72nd street was said to have the highest prices on its menu, even more than The Plaza.[i] Six hundred jazz babies could dine at tables draped with maroon clothes and white napkins. Steak was served and wine poured. There were a pair of giant glass chandeliers and black mirrors that embellished the Art Deco interior. Eileen and Louis danced to a live orchestra on a crowded dance floor.

No doubt it wasn’t Eileen’s first visit to the tony club as oftentimes Ziegfeld girls were given a police escort after their show. The restaurant served dinner until well after 3am. Flo Ziegfeld was a frequent customer and his showgirl Betty Compton was Mayor Walker’s mistress. It was all fun and games at the Casino even with 13 million currently unemployed and Hoovervilles marring the landscape.

This night there was laughter as champagne corks flew. Sometime past midnight another couple joined Eileen and Ehret for a drive in the fancy car he had borrowed from his mother. He would later admit to possibly having imbibed a few champagne cocktails. In the driver’s seat Ehret rounded a corner as a car sideswiped the car, Louis swerved into a lamppost. In the front seat Eileen was thrown into the windshield where she was severely cut.

Examined at the hospital her left nostril had been torn, a jagged cut ran diagonally from her forehead over her eyebrow and across her eye. Glass had severed a muscle in her face giving her a drooping mouth. She required 37 stitches, which still left an eyebrow raised weirdly above the other and a twisted lip. Also her showgirl thighs had been burned in the accident.

[i] The Casino was torn down in 1936 and today is the site of SummerStage. 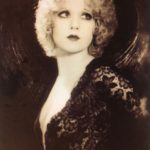 The girl who had been known as “angel face” was left with a mass of scars on her destroyed face. No longer “the most stunning show-girl on Broadway.” The accident ruined her looks — and her life. Her face had been her ticket as it was for all showgirls at the time. Girls were not hired for a diversity of looks, they were often times precisely measured and weighed as it was mostly a uniform look producers wanted, and the vast majority where blonde and white.

Wenzel remained in the hospital for months. When she left she sued her unlucky date to the tune of $250,000. It would take two years for the case to go to trial and when it did it was painful.

Eileen’s loyal and beautiful showgirl sister Rose set by her side holding her hand. Rose was married to showman and master of ceremonies Nils T. Granlund and proved to be a startling reminder to all just what Eileen had lost physically and emotionally. Eileen set through well-meaning friends’ testimony boasting she had had an “angel face.” Jurors were told how her chances of finding a husband were slim if impossible. Former employer Earl Carroll, one of the most underrated producers of his day, testified to her gracious looks. “Her brow was as white as the driven snow,” he said as jurors stared at her mangled and scarred forehead. “Her eyes made strong men swoon,” Carroll poured it on. “There is no possibility of her being engaged in a Broadway production today.” A year prior she had claimed $8,000 -$10,000 income from her beauty.

The jury was shown before and after pictures. Wenzel, who had been called a “photographer’s delight”[i] was told she was “pathetic.” She claimed she was suffering trauma due to the scars and she was.

She listened quietly to how she no longer had value. No one would hire her on Broadway. Eileen left the courtroom sobbing.

It would take a mistrial and another jury for Eileen to win a judgment of $90,000. The judge was so incensed by what had happened to the showgirl he lectured, “If Eileen Wenzel had been my daughter, gentlemen, and I saw her in her present mangled condition, I’m sure that you as a jury would have acquitted me for anything I had done then!”

Eileen took her award money (now $40,000 after an appeal) and underwent extensive plastic surgery, though given only a 50–50 chance that any of her looks could be salvaged.

Fortunately, the surgeries did much to restore her beauty.

In 1938 she made headlines when she became engaged to heavyweight prize fighter Tommy Farr, only to call of the wedding months later, though her showgirl days were behind her.

Eileen, who once said “I believe that beauty — expensively got up — is beauty intensified,” would find love, or financial security, by marrying Max Bamberger, another millionaire, perhaps indeed verifying that $40,000 spent on plastic surgery had worked. 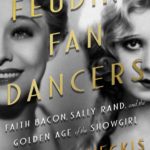 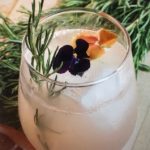 Sprig of rosemary for garnish

Bring the water and sugar to a simmer over medium high heat. When the sugar has dissolved, add the rosemary and continue to boil for 1–2 minutes. Remove from heat and strain, carefully. Refrigerate until you are ready to use.

Zemeckis current book, Feuding Fan Dancers will be published October 2nd, 2018 about Sally Rand, Faith Bacon and the golden age of the showgirl

Leslie Zemeckis is an award-winning documentarian whose film “Behind the Burly Q” chronicles the history of burlesque. Her film “Bound by Flesh” is a Netflix hit about Daisy and Violet Hilton of “Sideshow” fame. Zemeckis authored “Behind the Burly Q, the book based on her film and “Goddess of Love Incarnate” about burlesque stripper Lili St. Cyr. Zemeckis’ current documentary “Mabel, Mabel, Tiger Trainer,” on the world’s first female trainer Mabel Stark premiered at the Santa Barbara International Film Festival going on to win numerous awards. She has created the only comprehensive burlesque site bringing together the burlesque community under one roof (www.theburlyq.com) and has create the first line of burlesque, showgirl, pinup (and flamingo) emojis (Burlyqji.)