A Showgirl You Should Know: Faith Bacon “the World’s Most Beautiful”: By Leslie Zemeckis

A Showgirl You Should Know: Faith Bacon “the World’s Most Beautiful” 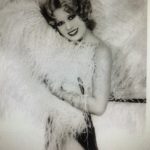 Faith Bacon was born in 1910 in Los Angeles to an ambitious young mother who was still in her teens and a father from a prestigious northern California family. After a mysterious and tumultuous upbringing, her parents divorced and Faith’s mother dragged her across the country in pursuit of men and show business opportunities for her nubile daughter.

By 1923 mother and daughter found themselves in New York. Thirteen-year-old Faith was tall, thin, and blonde, with wide round eyes. She looked startling similar to movie star Clara Bow. Over the next several years, Faith, like so many showgirls before and after her, toiled in the chorus, working hard, eating little, sleeping less. It was days of long rehearsals, fast-paced shows and hustle. As the family breadwinner Faith pushed herself and so did her mother. Except she now had to call her mother “sister.” And the story was they were both orphans.

By the time she hit seventeen Faith and her “sister” moved on to the City of Lights. Paris was everything in the 1920s. It was jazz babies, Josephine Baker and Hemingway. “Cafes along the Rive Gauche were meeting places for the many artists exploring surrealism and joining the avant-garde movement.” There were popular musical halls like the Moulin Rouge and the Folies Bergère where showgirls shimmied in very little clothes but did wear piles of feathers and beads. It was les annees folles, the “crazy years.” And Faith was in the middle of it. She was on stage, she claimed, dancing with Maurice Chevalier, a huge star who was performing at the Casino de Paris. Leon Volterra’s Casino de Paris could legitimately claim to be more popular than the Folies Bergère or Moulin Rouge.

The lobby was “majestic and sublime.” Twenty columns supported a ceiling full of naked woman. A huge, glass-walled swimming pool could rise and occupy the entire stage.

Cosmopolitan audiences from around the world came in droves to eat and drink in over-the-top elegance, hoping some of the sophisticated eroticism would rub off. 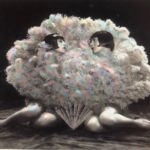 In the cast with Faith was the magnificent Dolly Sisters, gorgeous performers who looked so alike even their respective husbands (for the short time they were married) could tell them apart. The sisters dressed identical in beads and feathers and jewels. In one act, that surely Faith would have seen, the sisters waived giant ostrich fans and the audience fell at their feet. Gobs of money were thrown at them to keep them employed and bewitching the crowds. For one week $58,000. 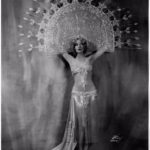 Faith’s time in Paris was short but unforgettable. It set a new bar. With her ambition fueling her she returned to New York. By 1928 Faith would be hired by impresario Earl Carroll who produced some of the most elaborate, risqué, over-the-top of the girlie revues. A fierce competitor with Flo Ziegfeld, Jr. Carroll would never receive his share of well-deserved accolades for his beautiful shows nor his innovations in the theatre. It was Carroll who “was the first to have an orchestra rise from the pit. Other and future innovations would include individual program lights at each seat and the game-changing introduction of microphones on stage. He made vast improvements to lighting and the counterweight system that would hoist lights, curtains, and scenery.” 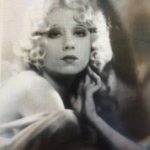 With Earl Carroll Faith was well on her way to fame and fortune. In 1930 she became his principal nude. She was twenty years old. The show was Vanities of 1930, music by Harold Arlen and costumes by twenty-one year old Vincent Minnelli opened July 1 at the New Amsterdam.

Faith appeared in a smattering of scenes. She came up with the idea to appear on stage totally nude — legal at the time as long as one did not move — holding giant ostrich fans to cover her nudity when she did move. When she stopped moving the fans were raised above her head and she was unabashedly naked. When she moved they were her protection.

However clever the act was, it brought the wrath of the police down on the show and Faith who was arrested. 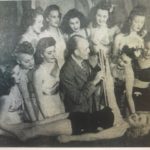 At the trial the bailiffs were so taken by Faith’s beauty they asked her to pose with them for photographs. She obliged, smiling happily.

In no time Faith was sought out by other nightclub and theatre owners. The new “It” girl. She would find herself featured prominently in Ziegfeld’s Follies the following year.

Faith was squired about town by eligible bachelors and those not so available. She claimed she would not let a man mar the beauty of her body. There were other reasons behind this proclamation and her apparent coldness to her suitors. 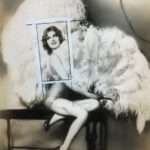 She would work steadily throughout the 1930s into the ’40s, teasing her audience behind her giant fans, gradually coming up with acts that were more nude, more competitive, more desperate. You see showgirls were becoming a thing of the past. An era was passing Faith by just as she had made it to the top. She was not prepared for another kind of life. 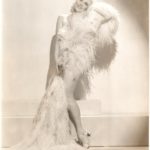 Then there was the Sally Rand problem. In 1933 Sally took Chicago by storm performing her fan dance at the 1933 Century of Progress, world’s fair. Rand would reach a level of fame Faith had never experienced. It ate at Faith, who quickly got herself hired at several world’s fairs and did her best to flap away the competition. And with Sally’s press there were suddenly a plethora of fan dancers on the midways.

Over the next several years a series of accidents would befall Faith. Injuries, lawsuits, bad luck.

While I won’t give out her end here, Faith, as so many showgirls before her, eventually faded into obscurity no longer a dazzling teenager. She had been brought up to believe her worth lay in her beauty. The world was hers if she only remained beautiful. 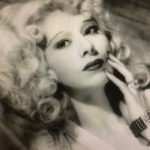 Showgirl Dorothy Knapp “would say about being labeled the most beautiful: “I have found it isn’t a fine thing to be the `most beautiful,’” warning if she had had foresight, “I’d have tried to succeed through hard work rather than beauty.” 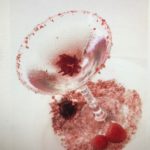 Recipe for the Faithtini Cocktail

Dampen the rim of a martini glass with the wild hibiscus syrup. The best way to do it is to put a bit of the syrup on the edge of a paper towel and dab it around your glass rim. The syrup is too precious to pour and waste. Take the dehydrated raspberries and chop finely, almost to a dust, and combine with the sugar. Then twist the edge of the martini glass in the mixture until cover. Place the hibiscus flower in the center of the glass. In an ice-filled shaker, pour the vodka and the rosé, then a teaspoon of the syrup. Shake vigorously. Strain into the prepared glass. If you’re filling real authentic, present a side of bacon with the Faithtini. Enjoy! 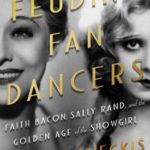 Leslie Zemeckis is an award-winning documentarian whose film “Behind the Burly Q” chronicles the history of burlesque. Her film “Bound by Flesh” is a Netflix hit about Daisy and Violet Hilton of “Sideshow” fame. Zemeckis authored “Behind the Burly Q, the book based on her film and “Goddess of Love Incarnate” about burlesque stripper Lili St. Cyr. Zemeckis’ current documentary “Mabel, Mabel, Tiger Trainer,” on the world’s first female trainer Mabel Stark premiered at the Santa Barbara International Film Festival going on to win numerous awards. She has created the only comprehensive burlesque site bringing together the burlesque community under one roof (www.theburlyq.com) and has create the first line of burlesque, showgirl, pinup (and flamingo) emojis (Burlyqji.)