Marci Darling is a sassy bon vivant who’s previous careers include belly dancer, burlesque dancer, showgirl, circus acrobat, gambler, and preschool teacher. She has performed around the world and danced on tour with The Go-Go’s, the B-52’s and Paul McCartney. She is the author of Martini Mystery: A Love Letter to New Orleans, starring an ex-showgirl-turned-detective and the upcoming Martini Mystery 2: The Champagne Scandal, as well as a nonfiction book called Divorce Diva. She is known around her house as MOM, or the Monarch of Merriment. She holds a BA from UCLA a Masters degree from Harvard. You can read more of her writings at www.marcidarling.com.

I turned 50 last year and decided to tick some things off my bucket list. The first thing I did was reach into my dream file and pull out a folded up newspaper clipping about my hero, iconic showgirl Josephine Baker, and her castle in France. 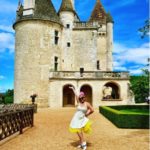 I have always adored Josephine and I have had her photo on my wall everywhere I’ve lived for the past three decades. In my burlesque act in the 90’s, a contortionist duo act called Honey and Vermilion that I performed for years with my best friend, we did an homage to Josephine wearing golden banana skirts and brown sequin tops. 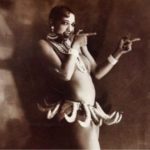 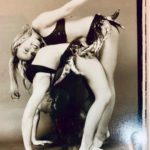 Now, I write mystery novels where my detective, Ellington Martini, is an ex-showgirl. In my new mystery, The Champagne Scandal, I wanted to delve deep into one of my favorite topics, burlesque costumes. The mystery centers around the theft of some priceless costumes, namely Josephine Baker’s tuxedo, jewels, and her banana skirt.
So really, my dream trip to Josephine’s castle was not just a bucket list item, but research for my new book, and if my books ever make money, a “write-off”.
So… perfect in every way!
When I first saw a black and white photo of Josephine staring out at me, dripping in jewels in a silk gown with her pet cheetah at her feet, my heart sang. She was everything I love about showgirls: glamorous, gorgeous, divinely decadent. Pre-google, I bought every book I could find about her. When I learned more about her life, she became my idol.
My favorite facts about Josephine:
1) She was born in Missouri, and worked as a domestic at the age of 8 and lived on the streets in a cardboard shelter, scavenging for food. Her first marriage was at age 13, and she was married four times throughout her life. She became a professional performer at age 15 and travelled to NYC, and became a huge star when she moved to Paris.
2) She created the iconic banana dance, sang, and starred in movies. She also walked around Paris with her pet cheetah wearing a diamond collar.
3) She bought a medieval castle in the Dordogne Valley in France, Chateau Des Milandes, and moved into it with her entourage.
4) Her Rainbow Tribe: MY FAVORITE FACT about Josephine, the one that really hooked me, was that she adopted twelve children from twelve different countries because she wanted to show the world that hate is not inherent in human beings—it is taught—and that it is possible to live peacefully and joyfully.
5) She was a war hero: because she was a star, Josephine was able to move freely during the war—she carried secret messages to the troops hidden in her sheet music. She also used her castle as a place to hide soldiers.
6) When Josephine went broke because people took advantage of her generosity, she lost her castle, and who came to her rescue? Grace Kelly!
7) Grace Kelly adored Josephine. They had become friends at a NYC restaurant one night when the waiters refused to serve Josephine because she was black. Grace Kelly witnessed the way they treated Josephine and got up with her entire party and left. Josephine and Grace became friends, so when Josephine hit hard times, Princess Grace hired her to perform in Monaco and gave her a villa to live in, where she lived until her death in 1975.
8) Her final show was financed by Princess Grace and Jacquie O.! She died four days later at age 68.
As you can see, Josephine was an extraordinary showgirl, a heroine, and someone to admire beyond her banana dance.
I wanted my children to know Josephine well. They know all about her of course, being the children of a showgirl—me. But I also brought my niece, a 14-year-old named Zoe, who knew nothing about showgirls until this trip. As far as role models go, you can’t get better than Josephine.
We rented a Jaguar in Paris, (the only car that could fit all our pink luggage and hatboxes), and in the first thirty minutes of our road trip, my 13-year-old son threw up in the back seat and had to sit in front the rest of the way, much to the consternation of my 15-year-old daughter and my niece. It took us five hours of gorgeous driving to get to the Dordogne, where I had splurged on two nights in a luxury castle. When we arrived at 9pm, I assumed we could find something to eat, but this being a medieval style village, all we heard was crickets. The only thing to eat was at the Michelin starred Louis IV salon at the castle where we had $75 spaghetti and retired to our room.
The next morning, I opened my pink suitcase and out popped the seven tutus I had packed. I had my kids film me while they threw the tutus at me to one of Josephine’s sings, La Conga Bilicoti, for me to post on my Instagram. I put on the ensemble I had brought for my visit: a 1950’s style halter dress covered in yellow bunnies, a yellow tutu underneath, and my Gucci sneakers that say “LOVED” across the top in rainbow crystals. I bought them as a treat for myself after a profoundly difficult two months where my beloved father died and my beloved husband left me. 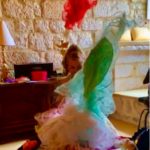 We played Josephine’s songs as drove the half hour through stunning countryside, stone fences, dreamy blue rivers, and medieval villages to Chateau Des Milandes, hallowed ground for me. I understood why Josephine had fallen in love with this incredible area and chose to make her home here. On the way, I told the kids more details about Josephine’s incredible story. We parked in knee-high grass and walked up to the castle. Many people who visit the castle know nothing of Josephine. They come to see the historical castle and to see the “Birds of Prey” show starring falcons and owls. 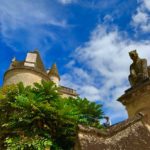 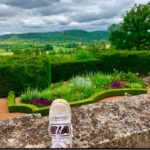 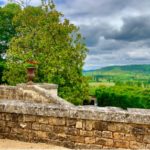 The castle, or manor house as the French call it, was a fort for hundreds of years, but in 1489, Francois de Caumont built it as a wedding gift for his wife. In the 1930’s, Josephine rented it and when it finally went up for sale in 1947 she bought it. Josephine lavished money upon the castle and the entire town, installing electricity and water and bus shelters, as well as putting on performances that drew thousands of spectators. The current owners have tried to preserve the castle exactly as it was when Josephine lived there. The kitchen is the same, with twelve chairs for the children and two for the parents.

I walked in through the stone door and with each step, my heart sang thinking that Josephine had walked this exact same floor many times. I walked through the costume room, filled with several of her stage costumes. For me, it was like visiting church, each costume a showgirl temple, each crystal sacred, each feather spiritual, each gown transformative. The climax was the glass box holding the banana skirt of course. To a non-showgirl eye, it looked like a heap of old fabric, but to me, it was like seeing the Holy Grail, and I expected a choir of angels to start singing when I saw it. I moved around the glass box, taking in every detail I could see, the stitching, the fabric, the shapes. 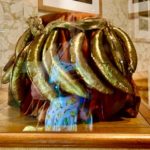 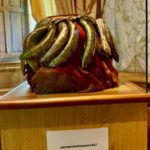 The costumes had actually been found recently in an unopened trunk in the basement.
Can you imagine? Can you imagine opening an old steamer trunk in Josephine Baker’s castle and finding the banana skirt??? AHHHHH!!!! (me screaming!!) Plunk. (me swooning).
I reluctantly moved along to more rooms filled with incredible memorabilia, personal family photos, old programs and luxurious furniture. Much of her things had been sold off when the castle was taken from her when she ran out of money. Just… it makes me apoplectic to think of bankers taking her castle from her—Josephine! Who gave so much to the world!! My god!! But there was her canopy bed and some chairs given to her as a wedding gift a king, and a room of twelve cribs and rocking horses with photos of the children on the wall. The stairs were steep and curving, as medieval stairs are, and light filtered through ancient windows, illuminating the rooms. I looked out the small windows and imagined her looking out at her children running through the gardens, shouting and chasing butterflies.
I walked slowly savoring every feather and rhinestone, and my teenagers walked through the rooms, looking at the costumes and the twelve cribs lined up in the nursery.
My favorite rooms on the first and second floors were her bathrooms, which she had done in the most fabulous art deco style to emulate her favorite perfume bottles—really.
For example she loved a perfume called Arpege by Lanvin. She installed black murano glass tiles and marble in one bathroom with a blue/green tub and sink, a silver leaf arched ceiling, and real gold accents. 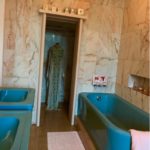 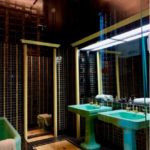 On the second floor, the owners have put up an army tent and have recreated a camp scene like the one she would have slept in when she worked for the war effort.
And of course the top floor, with a sign saying it’s not meant for children. I hopped up those steep spiral steps, the sunlight illuminating the stone steps so they looked like they were glowing, and arrived in a room that was full of her nude photos. I was alone up there, and I whispered, “Oh Josephine, I hope you know how truly extraordinary you were, and how your story still inspires so many people today.”
Last night, my 13-year-old son and I were watching Gossip Girl and there’s an episode with a movie about Josephine. My son said “Hey! It’s Josephine Baker!” I could not have been more proud. 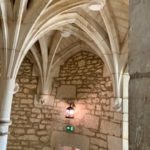 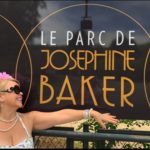 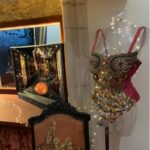 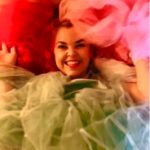