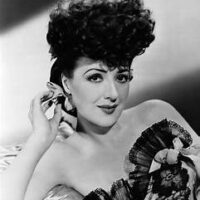 Hailed as one of the best strip-tease performers in the history of burlesque, Gypsy Rose Lee’s ascent to fame in the 1930s began purely by accident. The young Gypsy Rose, real name Rose Louise Hovick, was dancing on stage when the strap of her dress broke, causing it to fall to the floor. Going on the (very positive) reaction from the audience, she realised that combining stripping with dancing could be lucrative and she began performing her signature slow strip-teases in venues across America. She spent four years dancing as the star of the famed Minsky’s Burlesque in New York before heading to Hollywood in 1937 to attempt to launch an acting career. Her memoir, written 20 years later, was made into the musical "Gypsy".