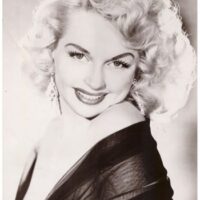 Dixie Evans was known as “The Marilyn Monroe of Burlesque”, first for her uncanny resemblance to the sex symbol and then for her frequent incorporation of popular Monroe references and films into her acts.  She adopted the tagline after burlesque impresario Harold Minsky pointed out the resemblance upon seeing Dixie perform her famed “Hollywood casting couch” act at his theater.  Dixie started imitating the star on stage the very next day.  “I didn’t think you’d do it so fast,” a surprised Mr. Minsky told her backstage.  As Dixie explained, “If you don’t go over well in burlesque, you don’t work. And I had to work. Besides, it was easy for me to fall into that act.  I learned to walk and talk just like her.  I followed her career move for move.  Every time a movie with Marilyn came out, I ran to see it.  The next day, I’d start a new act based on what I saw or read about in the papers.”

Dixie started working various jobs in her teens – at a Catholic Hospital, in the celery fields, at an Army base – and at the age of 16, she dropped out of high school.  It was about this time that she began taking dance lessons to fulfill her aspirations of becoming a Hollywood starlet. She joined the chorus of The Orchidias de Hollywood, who performed in Mexico, as well as The Moonie Dancers, who toured to Anchorage, Alaska, giving Dixie an exotic introduction to being on the road.  During her ingénue career, Dixie modeled and took gigs performing with The Clyde Beatty Circus and as a page in San Francisco, which led to her first gig performing solo at the Spanish Village.  Soon, she got booked at the Follies Theater in Los Angeles, where she met manager Lillian Hunt and costume designer Gussie Gross.  Later, Lillian would put Dixie’s Hollywood act on celluloid in the 1950 burlesque film Too Hot to Handle, and Gussie would make wardrobe for Dixie.  “I didn’t have money back then to pay for a big, elaborate costume,” Dixie said, “so I paid for that first costume inch by inch!”

Dixie performed in burlesque theaters across the country, including the President Follies (SF), Follies Theater (LA), Rialto Theater (Chicago), Minsky’s (New Jersey), and many more.  “When I started getting into burlesque, theaters were past their hey-day,” Dixie explained.  “So I started working in clubs more.”  For the majority of Dixie’s career, she traveled around the country as “The Marilyn Monroe of Burlesque”, working in burlesque nightclubs, including the Place Pigalle in Miami Beach where she headlined, on and off, for about a decade.  She met her future husband, the prize fighter Harry Braelow, at the Place Pigalle, and they wed in 1963.  Marilyn Monroe’s death on August 5th, 1962 forced Dixie to revamp her act, as imitating the beloved star she so admired felt sacrilegious to her.  (By coincidence or fate, Dixie passed away two days shy of the 51st anniversary of Monroe’s death.)