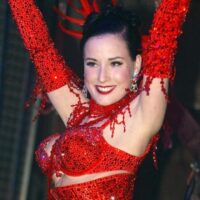 The dwindling popularity of burlesque dancing was revived in the early 1990s by Dita Von Teese, hailed “The Queen of Burlesque”. The former Mrs Marilyn Manson is famed for a number of elaborate stunts, including a performance at The New York Academy of Art in which she wore $5million of diamonds and nothing else. Von Teese's signature acts consist of dancing in a giant martini glass or with the world’s largest feathers, in a dance inspired by Sally Rand.