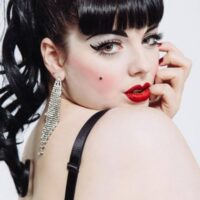 Known as the Beauty and the Beast of Burlesque, Bunny Buxom is a New York based burlesque performer and producer. Upon graduating from the New York School of Burlesque in 2011, Bunny has taken every stage she struts on by storm. Bunny has her hand in many different burlesque genres including classic, neo, pop culture, and horror, all of them displaying her signature brand of sex appeal and humor. Bunny has traveled around the U.S. and Canada performing and has been featured in the Vancouver International Burlesque Festival, the Great Canadian Girlesque Expo in Toronto, the Show Me Burlesque and Vaudeville Festival in St. Louis, the Windy City Burlesque Festival in Chicago, the Pennsylvania Burlesque Festival, the New York Burlesque Festival, and the Dirty Devil’s Peepshow at Theater Bizarre in Detroit to name a few. In 2015 Bunny had the pleasure and honor of competing for the title of Best Debut at the Burlesque Hall of Fame Festival in Las Vegas as well as the title of Miss Coney Island at the Miss Coney Island Pageant in Coney Island. In New York, Bunny is main member of the Pink Room, a neo burlesque troupe who performs David Lynch inspired burlesque, and can regularly be found performing more traditional acts at venues like the Slipper Room, Hotel Chantelle, and Nurse Bettie. In addition to performing, Bunny was the production assistant for Pinchbottom Productions and produced the weekly shows Dead Sexy and Church of Titillation and many others with Jonny Porkpie from 2012 to 2014. Bunny started producing on her own in December 2014 and created Rabbit Hole Productions, which kicked off with Hollaback Girls, a benefit show for the anti street harassment organization, Hollaback! Since then, Rabbit Hole Productions has been putting on themed monthly shows at the Parkside Lounge with growing success. The themes range from Spice Girls to Nightmare Before Christmas in July to Nippelodeon, but they all share the common thread of social awareness. Rabbit Hole Productions aims to not only put on high quality burlesque shows, but to also create a conversation about social awareness through sex positivity, body positivity, and a feminist lens. Rabbit Hole Productions has been instrumental in the ongoing conversation of feminist issues in the burlesque community and has become a beacon for patrons and fans who share likeminded views. Bringing brains to her beauty, Bunny has also worked with various feminist organizations and companies like Slutist and SmartGlamour clothing, sometimes being a model, and most often being featured in interviews about body positivity, sex positivity, and feminism. Known for her social politics and activism as well as her performance style, Bunny is one to watch as a key player as we usher in yet another new era of burlesque.